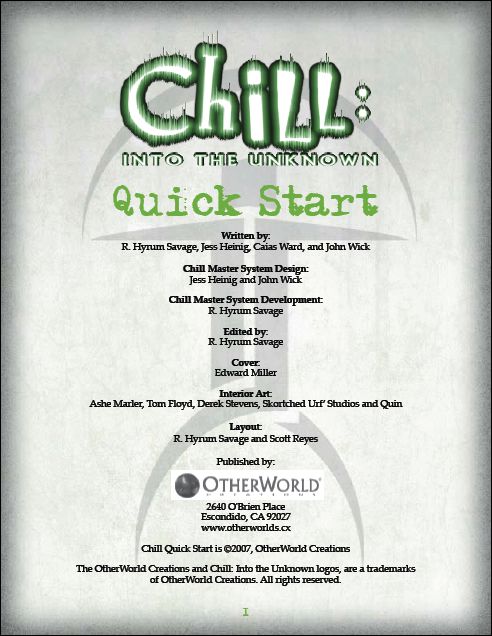 All 4 editions of Chill have had quickstart rules.

The world of Chill is a world of horror. However, it is also a world where mankind fights to take back the night in the face of that horror.

In Chill, you play an envoy, an agent of the secretive organization SAVE, a group dedicated to the observation, study, and eventual destruction of "the Unknown." What exactly is the Unknown? Well, SAVE isn’t exactly sure. They have a working theory, but almost nothing can be said for certain of what SAVE's founder called "the Enemy" save one thing: it is a source of unspeakable evil.

Your envoy was once a normal person, but exposure to the Unknown has awakened something heroic in him (or her). SAVE, in its fight against the Unknown, watches for people who have survived such encounters, and brings them into the organization to help with the fight. Now, your envoy and others, travel the world in search of elusive clues and weapons to battle the Horrors and defend against the magic and machinations of the Unknown.

In the world of Chill, the Unknown spawns Horrors both familiar and alien. Vampires, werewolves, zombies and their like come from the Unknown, but there are other horrors that defy description. One thing is certain. When the Unknown is present, nothing is safe or normal. If a vampire moves into town, the crime rate increases, domestic violence increases, the weather changes, children suffer nightmares and wake in cold sweats. When the Unknown enters our world from its shadowy plane of terror, it brings with it corruption that gets right into the marrow of our reality and starts sucking.