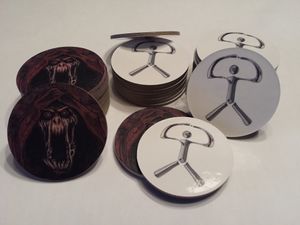 Chill 3rd Edition is an investigative horror roleplaying game about people who stand up against monsters, hunting down supernatural threats and protecting the world from the Unknown. You don’t have to be a superhero to be a member of SAVE; you just have to stand up and join us.

Like any game, Chill has rules. The rules in Chill are meant to facilitate the atmosphere of investigative horror — the characters learn about the mystery, gather information, and eventually confront the Unknown. Along the way they might be injured or scared out of their wits. They come up against supernatural creatures with evil, otherworldly powers, but they can use paranormal abilities of their own. Chill rules incorporate all of this and more. THE DICE

Chill uses two ten-sided dice, also called “percentile dice.” One of these dice is designated as the “ones” die, while the other is the “tens” die. By reading the dice this way, you generate a number 1-100 (many ten-sided dice have a 0 on one facing; if you roll double zeros, read the dice as “100”). Decide at the beginning of the game how everyone is going to read their dice; if you have two different colored dice, for example, the red one might always be the tens die and the black on the ones die. Some ten-sided dice are labeled “10, 20, 30, etc.” rather than with single digits. Some players prefer to “read” their dice left to right as they roll. Use whatever method works for your table.

Most rolls in Chill are called checks. Checks determine how successful a character is at attempting to do something within the game. For example, a character might attempt to climb up a tree to get away from a slavering monster; the player in this case would make a Movement check. Likewise, in a less fraught example, a character might attempt to do research in a library to determine what that monster in the woods is and how to defeat it — the player would then make a Research check.

A check is successful if the result is lower than a particular number, usually a skill or attribute rating (we’ll get to these terms in a bit). That number is called the target number. The higher the target number, the easier it is to roll under it, so you want your target numbers to be as high as possible. If a target number is 100 or more, you can only fail if you roll 100. A roll of a 100 is a failure, no matter what. SPECIFIC CHECKS

During a game of Chill, the players and the Chill Master have access to a set of tokens. In terms of the story, these tokens represent the relative strength of the Evil Way and the Unknown vs. the players’ characters. This balance will shift back and forth during a case; both sides will use the tokens to improve the results of their rolls, activate supernatural powers, and otherwise influence the narrative.

Tokens need to have a recognizable “light” and “dark” facing. Coins work (heads for light, tails for dark), as do poker chips (just take a marker and black out one side) or playing cards (card backs for dark, faces for light).

A player can turn a token dark (flipping it from the light side to the dark side) to accomplish the following:

The Chill Master can turn a token light (flipping it from the dark to the light side) to accomplish the following: